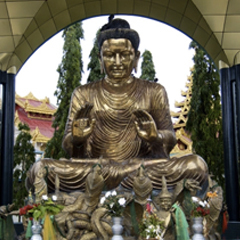 Our most recent travels took us to a place that was just as unknown to me as it was to Seinfeld’s leading lady, Elaine Benes.

Our most recent travels took us to a place that was just as unknown to me as it was to Seinfeld’s leading lady, Elaine Benes. Seinfeld enthusiasts will likely recall this classic exchange between Elaine and her globe-trotting boss, Mr. Peterman.

Scene: Mr. Peterman in a phone booth in a far-off land. Elaine on the phone in her Manhattan office.

Mr. Peterman: Oh, Elaine. You may know it better as Myanmar, but it will always be Burma to me.

For many (including Elaine and me), Myanmar, formerly known as Burma, is a country that is widely unknown, untraveled, and misunderstood. The reason being is that for much of the country’s independent years (since 1948) it has been under military rule and engrossed in a civil war. It’s only been following the official dissolving of the military juncta in 2011 that tourism has been on the rise.

Years of isolation from the outside world make Yangon an intriguing mix of old, older, and ancient. In ‘modern’ Yangon much has remained unchanged and little has been well maintained since the early ’50’s. And then there are pockets of two eras bygone – the colonial and pre-historic Burma – that have been immaculately preserved. Experiencing these pseudo time capsules made our trip to Yangon feel like a time-traveling adventure.

There is nothing truly modern about Yangon as years of economic dysfunction have taken a considerable toll on the cityscape. Mildew-covered buildings haunt the city streets. Public buses (packed to the gills with riders) seem as though they’ve been in service for decades. And, ravaged city sidewalks are more like obstacle courses for pedestrians.

That being said, it’s somewhat refreshing to visit a place that is totally void of the ubiquitous chains that now populate every Asian city. Who knew that a city could function without a Starbucks, Ferragamo, and KFC on every corner? The absence of these brands makes it easy to imagine what life was like sixty years ago when Myanmar was the second wealthiest country in Southeast Asia and seemingly on the fast track to economic glory days. Sadly, this once thriving country has instead become the third most isolated country the world (congratulations to North Korea and Somalia for receiving the gold and silver in that category, respectively) and the 39th poorest.

For nearly 150 years, Burma was an important British colony. Most of the jaunts we frequented during our stay in Yangon were built by the British during this period and provide an amazing glimpse back in time. Sweeping lobbies with black and white tile floors and massive overhead fans invite visitors in for a break from the oppressive tropical heat. Wicker furniture, massive palms, and exquisite fretwork easily coerce them to stay awhile. And the beautiful teak bar rooms make them think, ‘There’s nowhere else I really need to be.’

Our visit to Yangon coincided with monsoon season so the incessant downpours forced us – with little disappointment – to really hunker down at these colonial establishments. As we cozied up with Manhattans and Old Fashions to let the rainy afternoons pass, Jeff and I couldn’t help but imagine we were characters in a 1920’s spy novel set in the Far East. Jeff – the narrator – incessantly rattled off lines in an ominous voice like, ‘I was meant to meet our man in Yangon at The Savoy Hotel.’ Or, ‘It’s raining. Then again, it always rains in Yangon.’

If Jeff really were a British spy and I an adventure-seeking heroine, I’m certain our rendezvouses would have taken place at these spots:

During our time in Yangon, we stayed at the Hotel Savoy which was actually only built in 1995 but it so perfectly mimics the colonial style that I could have been easily fooled that it has been welcoming guests for ages. It’s just a stone throw away from Yangon’s pièce de résistance – Shwedagon Pagoda. Guests are treated to views of the pagoda as they get their day started over breakfast at Kipling’s Terrace or as they wind down over an evening cocktail at The Captain’s Bar. (Even the restaurant names are throw backs!)

This red brick manor house, which dates from the beginning of the British colonial period, is now home to the best restaurant in town…probably in the country…and in my opinion possibly in Asia. Nonetheless, the highlight of the evening may have been the antique car hotel transfer – compliments of Le Planteur. Again, my imagination easily ran wild with visions of Jeff as Gatsby and me as Daisy.

But, buyers beware, the restaurant only takes cash. Jeff and I were counting our pennies throughout the meal wondering, ‘Can we afford just one more glass of wine? Is there enough to cover just a taste of dessert?’

Dating from the 1920’s, this colonial-style mansion formerly housed the governor of Myanmar’s southern states. It only housed Jeff and me for a rainy afternoon, but should an extended stay have been required, I would have been more than happy to oblige.

Today, we have the Hiltons, the Pritzkers, and the Marriotts. But, at the turn of the 20th century, the Sarkies Brothers were the Southeast Asian hoteliers. We’ve now hit up all three of their still-standing grand colonial hotels including The Eastern & Oriental Hotel in Penang, The Raffles Hotel in Singapore (of course), and now The Strand Hotel in Yangon. These hotels are absolutely majestic, incredibly restored, and should definitely be on your itinerary should you visit any of these cities. We’ve found though, with the exception of Raffles, that the hotels are always nearly empty. No people watching = a snooze fest for me. (Jeff loves to capture me running out of steam.)

Two final colonial hot spots to round out my list include Monsoon Cafe and L’Opera.

Hit up Monsoon Cafe for a city-center lunch break from the heat and scary sidewalks. The food is nothing to write home about, but the ambience and service are lovely.

L’Opera is located in a stately home outside of the city center and off a dirt road which seemed to me like a good place to hide dead bodies. Once you get inside, the Italian cuisine makes the creepy trip worth it.

The second era that is so exquisitely preserved in Yangon dates back to a time long before the British arrived – some 2,000 years before in fact. Yangon’s collection of breathtaking Buddhist pagodas offer visitors a taste of seriously ancient history that is still alive and well today. We visited two of Yangon’s ‘big three’ payas and skirted around the third (Sule Paya). I found this time traveling experience a bit mind boggling. Religious pilgrims have been visiting these sites and performing the same religious practices that we observed for THOUSANDS of years. Talk about standing the test of time!

Shwedagon Paya has lots of superlatives attached to its name – oldest, most sacred, and in my opinion, most beautiful. This pagoda has existed for over 2,600 years making it the oldest pagoda not only in Burma, but in the world. For any Burmese Buddhist, getting to the Shwedagon Pagoda is the trip of a lifetime and once they make it, they are sure not to be disappointed. The pagoda is covered head to toe in gold and simply glistens from vantage points all throughout the city.

That being said, as compared to other religious powerhouses like Angkur Wat or the Taj Mahal, I don’t think this monument gets nearly the press it deserves. And, as a result (and lucky for us), it doesn’t attract the hoards of tourists. This has been one of the few times in our Asian travels that Jeff and I truly stuck out like sore thumbs as obvious tourists. Usually the Chinese tourists with the tripods and tour buses take the cake in this regard.

On the ‘awe-inspiring’ spectrum, Botataung Paya falls much lower than Shwedagon Paya. As a result, we were almost in and out in ten minutes but luckily we were talked up by a very chatty monk who gave us the lay of the land and revealed some of Botataung Paya’s hidden secrets. He led us back to a monster Buddha that would have definitely gone unnoticed otherwise, explained what the water pouring practice was all about, and highlighted that President Obama and I have the same Burmese Zodiac animal sign – the guinea pig (obviously).

Our trip to Myanmar was nothing if not enlightening for me. I arrived on a Friday evening knowing basically nothing about Myanmar thinking to myself, ‘Or is it called Burma?’ Forty-eight rainy hours later I felt like I had a glimpse into not just Myanmar as it is today, but what it was like hundreds and thousands of years ago as well. If you have yet to visit Myanmar, hopefully I’ve piqued your interest and you’ll get there and do a bit of time traveling yourself.

This article was originally published by The Girl on The Ground and reproduced with permission.

Keep up with all of the latest news and announcements

Enjoy reading publications from your peers locally and abroad

Out of the Office

Stay strong and focused to enjoy what you want to do

10 Steps to Your Next Promotion